Mother’s Day is one of the most popular holidays in America. More phone calls are made on this day, I’ve read, than on any other. Whether we had good mothers, bad mothers, known or unknown mothers, we think of mothers as ideally kind, soft, gentle, forgiving, and giving.

The image of the Divine as a Mother Goddess is one of the oldest in history. The first idea of the Divine in ancient Egypt was probably a goddess. Although it isn’t very well known in the Jewish/Christian/Muslim tradition, it is still there. God is portrayed in Psalm 131 as a loving, kind mother, cradling and consoling us, her weary and tired children. Jesus is also portrayed as longing to gather his people together under his wings such as a mother chicken does her baby chicks.

In the Eastern Hinduism both the forces of male and female are important principles in attaining divine peace. There is Shakit (female) and Sheva (male) images in which one receives and nourishes while the other acts and takes. The earth itself is viewed primarily as a mother, “Mother Earth,” which generously gives for the welfare of life upon it.

In experiencing the deepest peace of God, the Creator of us all, the Unknown, Indefinable Entity everywhere, we need a strong awareness of the receiving mode, of opening our minds, hearts and attitudes to that which is being offered to us. The Course of Miracles often refers to this as the “little willingness” that can open up doors of deep peace and inner joy. It speaks of our human ego tendency to always feel we need do something, to change things rather than to just receive and enjoy the gifts of fulfillment. “Atonement cannot come to those who think they must first atone, but only to those who offer it nothing more than simple willingness to make way for it. Purification is of God alone and therefore for you.” (T. 18, IV.5) In the Bible we read of salvation being of grace alone, that we can do nothing of ourselves but accept it as the free gift which it is. “For by grace you have been saved through faith and this is not your own doing; it is the gift of God-not the results of works, so that no one may boast.” (Eph. 2:8-9) In the eastern religions, we can learn anew from Hinduism and Buddhism the art of listening, quieting the mind, and sitting in order to let go and receive. People are asked and invited to simply “be still and know God.”

I think of my own mother sitting for hours painting, knitting, pealing vegetables and ironing in silence. I think of my own wife’s ability to sit for hours focusing on one task of creation, or her ability to sit for hours focused on a book. I am much more likely to become anxious, itching for something to do. So I take walks, do exercises, hit some golf balls and return. But I realize that in the end, to receive deep peace and understanding of who I am as a Son or Daughter of God, I merely need to recognize the need to wait and receive. Indeed, there is nothing I need do but understand this.

There’s an ancient story in the east of a young boy who saw an old statute made of clay and dirt. He found it in the closet of his home and wanted to restore it making it into a gold statute. Being from a wealthy home, he got some gold and put a thin layer over the ugly clay. A few years went by and the gold began to chip off and show some clay beneath. The boy would turn it slightly sideways to high the clay spots. One day an old relative came to see him. He noticed the gold but clay spotted statute. The boy apologized for the ugliness saying he had tried to cover the beautiful form with a thin gold covering. But the old relative said, “Let me show you what it really is.” Taking down the statute, he scraped off the gold covering and on through the clay until he came to the core of the old statute, pure gold. “That,” he said, “is the true statute; solid gold, made centuries ago by a family member but it must have fallen into clay or mud and never was cleaned off.”

Such is our natures as people; good, loving, kind, eternal, forgiving, and “pure gold.” We tend to cover it over with our attempted works to improve it, to earn it, to let our ego selves think we can do it all by ourselves. Even religions can tend to just add layers of clay over that which is pure and eternal within, the gold of Ourselves. The secret is to realize we are already “gold” essences of the Divine itself. We are not originally totally depraved, but totally pure and love. Beneath all our works and ego tries lies the Christ, of which we are and have always been.

In listening, waiting, and simple acts of giving, we can experience it anew and be at peace. Like the loving mother who cradles and gives nurture to her child, God waits for us to return to her lap. And She will tell you that you too are host to the God of creation and fully worth of Her as well.

Happy Mother’s Day to all. 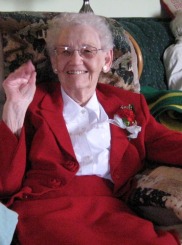