Christmas As The End of Sacrifice 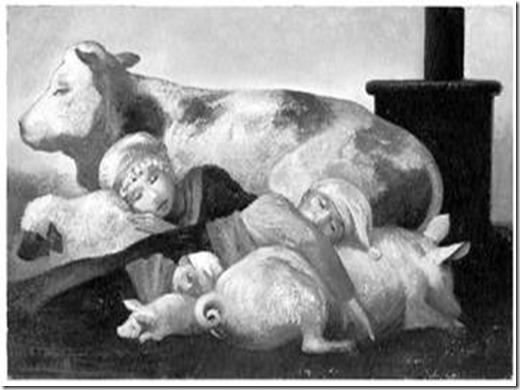 “…from now on all generations will call me blessed; for the Almighty One has done great things for me.” Luke 1:48-49

Christmas time is a stressful time for many! Do you agree? It seems that there are so many things to be done; shopping, decorating, while for many the need to work extra hours to keep their jobs. I always found the Advent Christmas season one of my most stressful times with the extra services, trying to take communion to homebound members, preparing extra sermons, and usually with a funeral or two added to the mix. Then of course there were the family obligations which I confess failure as they were faithfully administered by my dear wife Naomi. And as many middle-class families we always felt the stress of the extra expense that accompanies Christmastime purchasing gifts for family and friends. Fortunately, our wonderful congregation at Wayside usually gave us an extra month’s salary as a gift!

If you are a merchant running a store there are the extra hours to manage the hopefully extra shopping hours for the customers. I often wonder how the workers manage the stress on top of their other expectations of the season. But this season I understand sales are going quite well and the parking lots of the new Wal-Mart near us is usually quite filled. It’s one of the largest box department stores in the whole world, and the richest, even though I understand it pays its employees among the smallest salaries.

Dr. Stephen Hoeller, founding bishop of the Ecclesia Gnostica Church of North America, reminds us that Advent is the season to be renewed in the inward experience of the Holy Spirit’s presence. But he says in our culture the outward has taken over most of the season, with all the many presents and beautiful decorations with little renewal of spiritual sight. This may also be a part of traditional Christianity’s emphasis on the exterior rather than the interior dimensions of human existence. For centuries, the church has taught the literalness of stories such as a Virgin Birth on the Winter Solstice in a barn outside of Bethlehem with shepherds hearing angelic voices in the sky, but very short on the mythological meanings of these events and stories.

I do believe, however, that all the stress and extra expense could be avoided; it need not be! Much of the outward emphasis is an ego/body device to keep us away from the inner spiritual experience of the season. Advent/Christmas ideally, in the ancient understanding, was to bring a renewed sense of the “born again” experience. Embracing the darkness in the stillness was often enhanced by winter storms which now seem more rare in these northern hemisphere areas. We could be encouraged to take more time for stillness, meditation, and prayer. However so many of the Advent celebrations in our culture entail more lights and parties, more drinking alcoholic beverages often resulting in more needless traffic deaths. Again, this need not be.

Christmas is actually a time of deeper relaxation and renewal in love. Perhaps it was part of the rhythm of growing up on a dairy farm many years ago. Crops had been harvested, barns full of new hay, and much of the equipment stored away in sheds for the winter’s duration. There was extra time to read, sleep, and in my family’s case, even take frequent trips to Florida.

Christmas season therefore is a time to end the idea of sacrifice. Originally the idea of sacrifice was simply to make a sacred offering, a joyful thanksgiving, but it quickly became the idea of suffering in order to gain divine approval. We recall biblical stories of frightened people taking the best of their animals and grains to sacrifice at altars in order to receive divine blessing. It wasn’t originally to be this; they were to be used by the shamans and priests so they could spend their lives in prayer and teaching spirituality. The writer of the book of Hebrews in the early church wrote, “When Christ came into the world he said, sacrifices and offerings You have not desired, but a body you have prepared for me; in burnt offerings and sin offerings You have taken no pleasure.” Later he writes, “You have neither desired nor taken pleasure in sacrifices and offerings and burnt offerings and sin offerings; but see, I have come to do your will.” (Hebrews 10:5-6) The “body” simply means to be an instrument or vessel of communication of love to others.

Sacrifice, pain and even martyrdom do not earn God’s peace and sense of forgiveness, but simply the understanding of our identity as the Christ. It is our identification with the body which causes us to bargain for pleasure by earning it with suffering. The ego would rather kill us in our body consciousness rather than to have us discover our identities as Spirit. The whole world of the ego is world of win or lose, take or be taken, kill or be killed, sacrifice or die. The philosophy of the ego world is, “no pain no gain!”

A Course in Miracles teaches; “Fear not to recognize the whole idea of sacrifice as solely of our making. Your brothers and your Father have become very fearful to you. Can you with bargain with them for a few special relationships in which you think you see some scraps of safety.” It goes on to teach that “the sign of Christmas is a star, the light in darkness. See it not outside yourself, but shining in the heaven within, and accept it as the sign the time of Christ has come. He comes demanding nothing. No sacrifice of any kind, of anyone, is asked by Him. In His Presence the whole idea of sacrifice loses all meaning.” (Text. 15, XI.1-2)

Yes, Christmas is the time to renew ourselves in the relaxation of being loved! This is the source of True Joy. We have a couple friends who for years agreed at Christmas time not to give each other any material gift presents in order to relieve some of the seasonal stress! They’ve been married for over 40 years and are still doing well. My father lived to be almost 92, saying often in his later years at birthdays and Christmases, “Please don’t give me any more gifts!” At the Wayside Church in Hamburg they used to have yearly spring rummage sales for fundraisers. One of the promoters would often stand and announce, “Now is the time to bring in and get rid of all those Christmas gifts you never really wanted!”

I’m not on a campaign to destroy the gift-giving of tangible things but only to help remove some of the stress that we attached to doing it. But the guilt and the stress can be hard to let go. I encourage us to keep it simple. Try to emphasize “interior” as much as possible. You could plan to take a two or three night prayer retreat at nearby facilities. You might spend more time in meditation and pondering the inward meanings of the stories of Christmas. You could attend more concerts, take slow walks in the darkness and plan to get a few more hours of sleep.

In some districts of the French Alps I understand people historically slept during this time of year sleep as much as 20 hours a day! Their animals even slept with them and they only got up a few times to go to the bathroom, eat a few foods and return to sleep! Can you imagine doing this for two or three months each year? Maybe that’s why the French still hate to work more than 35 hours a week! Benjamin Franklin, on one of his trips to France, was on a ship that made port in southern France because of the prevailing winds. In order to reach Paris they had to travel across the French countryside in winter and came to one of the towns where people were all sleeping. Franklin wrote in his letters they couldn’t get even a meal or a drink because everybody was asleep! They were in unheated homes asleep with their animals surrounding them. Franklin found it disgusting!

“My soul magnifies the Lord,

And my Spirit rejoices in God my Savior.

For he has looked with favor on the lowliness his servant,

Surely, from now on all generations will call me blessed;

For the Mighty One has done great things for me,

And holy is his name.”

Escape the guilt and stress of the season! Simply realize you need to nothing to win God’s favor; You are already God’s Divine, Eternal Son and Daughter. Simply accept it and live as free people. You will feel much less stress and those around you will also in time. May deep peace, joy, and love abide with us all. Christmas is the end of sacrifice!