Nothingness from A Mystical Perspective 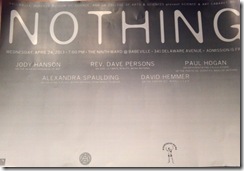 There are two ways I understand “Nothingness”. Nothingness describes the world of illusion, made up of things which appear to be solid and permanent but are only time bound, temporary condensed energy objects. Things appear to the human eye in solid form for a time then disappear again into “nothingness.”

On the other hand, “Nothingness” defines true reality as “Everything”. It describes the real in contrast to the unreal. Nothingness refers to the permanent in contrast to the impermanent. Estimates date the physical material manifestations of the universe around 14 billion years. They exploded out of something less than the size of an acorn, or seed kernel. This universe continues to expand but one day returns to the seed or “black hole.” Meanwhile, the visible 4 % pales in contrast to the 96% “nothingness”.

A few weeks ago I spent an evening with a young Tibetan monk visiting our area from Dharamsala, India, a follower of the Dalai Lama. He began by describing the essence of Buddhist meditation as escape from the impermanence which surrounds us. We then meditated seeking to leave the nothingness of the impermanent world to experience the nothingness of everything in the permanent world of spirit. Maybe it’s like the Buddhist who walked up to the soy burger stand and said, “Make me one with Everything”!

One of my favorite Eastern books, the Bhagadvad-Gita, reads:

“Know this Atman unborn, undying, never ceasing, never beginning. Deathless, birthless, unchanging forever. How can it die the death of the body? Worn-out garments are shed by the body; worn-out bodies are shed by the dweller within the body. New bodies are donned by the dweller, like garments.  Not wounded by weapons, not burned by fire, not dried by the wind, not wetted by water: such is the Atman. Not dried, not wetted, not burned, not wounded, innermost element, everywhere, always, being of beings, changeless, eternal, forever and ever.” (Translated by Barbara Miller, Kindle Edition)

Another favorite are the writings of Lao Tzu such as Tao Te Ching. I have a friend who sent me a paragraph from his Hua Hu Ching:

“The Tao gives rise to all forms, yet it has no form of its own.
If you attempt to fix a picture of it in your mind, you will lose it.
This is like pinning a butterfly: the husk is captured, but the flying
is lost. Why not be content with simply experiencing it?”   “Hua Hu Ching”, #6 by Lao Tzu

Since leaving seminaries, I learned to view God as a “no-thing”. A sign in our home reads, “The best things of life are not things.” Yet the classic definition of God from my Christian tradition was “God is Spirit, and those who worship (or pray) to Him must worship in spirit and truth.” This verse, from the Gospel of John, was the answer Jesus gave a Samaritan woman, asking, “Where is the proper place to pray?” Jesus said it makes no difference since Spirit is everywhere unbounded by time or space.

In my mystical understanding, identity then is not my body but Spirit. Contrary to most traditional Christian thinking, and in most practice, we are not different races and genders separated into various social economic classes, but are all one in Spirit. We are a plurality of forms or manifestations in our Oneness. It is symbolized by baptism: “For in one Spirit were we all baptized into one body, whether Jews or Greeks, bond or free, male or female.” (1 Cor. 12:13 and Galatians 3:28)

Since the Fourth Century, the Christian church mainly enforced form and structure enforcing creedal statements and prayers conducted in proper forms and words led by properly licensed holy men. When form dominates, Spirit and Everything is lost. Yet the essence of spirit is formless, and abstract understandings can be found in many of its writings and teachers. The 14th Century anonymous writer scribed in his classic writing called “The Cloud of Unknowing”:  (Anonymous to spare “trouble”?)

“Lift up thine heart unto God with a meek stirring of love; for only Godself, and none of God’s goods. And there, oppose to look or think on anything but Godself. So that no work in thy wit, nor in thy will, but only Godself thy seek. And to do that is to forget all the creatures ever God made and their works; so may thy thought or thy desire be not directed nor stretched to any of them, neither in general nor in special, but let them be, and take no heed to them. This is the work of the soul that most pleases God….one shall not take example in the bodily ascension of Christ, to strain his imagination upwards bodily in the time of prayer: but in that time, place, and body, these three should be forgotten in all ghostly working.” (The Cloud of Unknowing, Kindle Edition, 2007)

One of my favorite Gnostic writings, the name given to many church writings prior to the 4th Century, came in the 1960’s from the Columbia School of Physicians and Research Professor’s mystically channeled work called “A Course in Miracles”. Its 1200 pages with meditation exercises inverts traditional Christianity’s emphasis on form and literalness into formlessness and symbol. Here are a couple excerpts from the thousands in the book:

“The body no more dies than it can feel. It does nothing. Of itself it is neither corruptible nor incorruptible. It [is] nothing.” T.29.IV.5

“Have faith in only this one thing, and it will be sufficient; God wills you be in Heaven, and nothing can keep you from it, or it from you. Your wildest misperceptions, your weird imaginings, your blackest nightmares all mean nothing. They will not prevail against the peace God wills for you. The Holy Spirit will restore your sanity because insanity is not the Will of God. If that suffices God, it is enough for you. You will not keep what God would have removed, because it breaks communication with you with whom God would communicate. God’s Voice will be heard.” Text, 13.XI.7

Whether Jewish, Christian, Muslim, Hindu, Buddhist, Shinto, or one of the thousands offshoots, the essence is one Spirit, a non-corporeal Center called Spirit, Atman, Love, Tao or some expression of the permanent unseen, unfelt Divinity.

This understanding seems to be returning in our times through access to new studies and resources. The discovering in 1945 of the Nag Hammadi documents in Egypt opened up deeper understandings of Pre-Fourth Century Gnostic writings. Scientific studies and growth in Eastern religions and practices enhance the understanding of meditation and formlessness. Near death experiences also help. It’s also hard to read recent mystical studies without references to science, history and teachers such as Neils Bohr, Werner Heisenberg and others spinning off Einstein’s theory of relativity regarding quantum particles. My wife pointed out how last Sunday’s Parade Magazine recommended three current NDE books for reading, one being Eben Alexander’s “Proof of Heaven”. Alexander, a research surgical scientist experience experienced a 7 day NDE and later wrote fascinating descriptions of his journey into the spirit or “nothing” dimension:

“The unconditional love and acceptance that I experienced on my journey is the single most important discovery I have ever made, or will ever make, and as hard as I know it’s going to be, to unpack the other lessons I learned while there, I also know in my heart that sharing this very basic message— one so simple that most children readily accept it— is the most important task I have.” (Alexander III M.D., Eben (2012-10-23). Proof of Heaven (p. 73). Simon & Schuster, Inc.. Kindle Edition)

In summary, the “Nothingness” of the universe is everywhere and it is in us, and mystical perspectives see it as Us, the True Self, the Breath of Life, Heaven. I seek not to be fooled or deceived by the temporary, impermanence around us in body senses and the material world. I seek to remain free of guilt, fear, anger and hatred and treat ourselves, others, and all sentient beings with compassion, love, and forgiveness. For one cannot be without the other.

Summary of my talk offered at the 9th Ward located at Babeville, the evening of April 24, 2013. A wonderful evening and I met and heard wonderful people.

Retired minister who still writes, speaks some, hikes less, and golfs.
View all posts by David Persons →
This entry was posted in Spirituality and tagged Immortality, Mortality, Spiritual Nothingness. Bookmark the permalink.