How and Why I Chose the Vegan or Plant-Based Diet 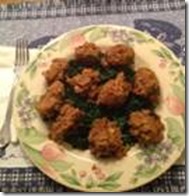 I recently placed on my Facebook a mushroom/spinach picture of an evening meal my wife prepared. One of the comments asked if I were a “vegan.” I thought I’d write a little response.

Throughout my life I’ve carried a consciousness about good eating. Perhaps it was my grandmother who warned us not to eat white bread since it was baked with embalming fluid. Perhaps it was the awful food I ate in college which found me as a senior selling “Juice Extracting” machines to help lose weight and “prevent cancer, etc.” Anyway, staying “slim” existed as kind of a quietly assumed expectation in my family. We ate lots of vegetables, mostly from our garden and being on a dairy farm, lots of meat from cows, deer and chickens along with plenty of fresh eggs. Despite the hard work in our little farm community, heart attacks and cancers were quite common the 50’s. My grandfather, a smoker, suffered his first heart attack at around age 60, retired from farming, and then resumed a few years later, living to age 88. Many others weren’t so lucky. My father always complained of an “aching, throbbing heart” which could bring him down at any time. He lived to be 91.

In the early 80’s I became quite attracted to Mahatma Gandhi and among other things, discovered he didn’t eat meat. Practicing at the time a denominational urging to “fast for peace,” I decided to cut back on eating meat. When I learned I was granted a trip to India to study meditation, with ashrams and much of the country not eating meat, I decided to go “vegetarian” to the surprise, or not so surprised, family. I got along just fine in India without meat but ate some Braham milk yoghurt to cool hot spicy meals.

Returning from India I continued to be vegetarian until the mid-90’s when my blood tests revealed my cholesterol was very high. I ate large amounts of dairy products and breads. I also gained nearly 20 pounds. I joined a health club and played racket ball and lifted weights but I gained more weight. When I reached age 60, my doctor put me on high doses of B complex vitamins to lower my triglyceride count which went over 700. Shortly before retirement in 2009, my doctor, considerably overweight, suffered a heart attack and quit practice.

Now weighing nearly 220 pounds, I was recommended to a “holistic” doctor from the University of Buffalo for advice. I took several years of my medical reports with blood test results. He told me at my age, I had a very high chance of having a major heart issue by age 75. He said I ought to begin taking statin medications. I asked for alternatives. He said “a radical diet change” and suggested something like the “South Beach Diet” or the “Zone Diet”. Having books from the 90’s on the Zone diet, I found a book with a 7 day, 21 meal diet plan and to the stress of my dear wife, I began following it January 1, 2010. In the next months and following year, my weight dropped to around 190. I purchased new clothes. I disciplined myself to stay on the diet for two years.

In autumn of 2011, WNED TV featured a fundraiser program with Dr. Joel Fuhrman called “Eat to Live.” I listened and after making a pledge, bought his books which were based on the phenomenal China Study book written by Dr. T. Colin Campbell, nutritional scientist from Cornell. I soon heard former President Clinton underwent a second heart surgery following an earlier triple by-pass. He consulted with Cardiac Surgeon Caldwell Esselstyn, a cardiac surgeon for years at the Cleveland Clinic, who convinced him to begin a “plant-based diet.” Dr. Esselstyn and Dr. Campbell, I discovered, were close friends.

Well, meanwhile I heard His Holiness The Dalai Lama speak 6 times over 6 years and each time he urged the goal of our lives to be love with compassion and kindness for ourselves, others, and all sentient beings. The later meant animals. I viewed the movie “Forks Over Knives”. I subscribe to daily blogs from “”Free From Harm” edited by Dr. Robert Grillo from Rutgers University. The blog depicts the brutal slaughter of hundreds of thousands of animals each year in our country. (freefromharm.org) I also read how much more energy and labor it takes to produce grains to feed animals for food in contrast to producing fruits and vegetables for humans.

This past year my weight has remained between 175 and 180, just about the amount I weighed when finishing high school in 1961. My cholesterol counts have lowered to well below the “high amount” suggested by charts. I hope to reach below 150 this year. My primary doctor has been supportive and recommends no extra blood medications. I realize at times it’s been tough on my wife and family but they have been very supportive and go out of their way to make sure I have “plant-food” options.

Thus I write the short version of “Why and How I Became Vegan” or a “Plant-Based” human being. I realize the shortness of life and I have little fear of death, but feel I want to do my little part to help lower percentages in becoming a long-term handicapped, confined, expensive elderly person. Currently the USA spends over $250 billion dollars annually on heart disease including surgeries and medications. Dr. Esselstyn argues this is only treatment which includes very little prevention. He strongly argues the best way to reduce the growing burden of financial costs as well as granting elderly folks a longer, more mobile life, is consideration and turning toward a plant based diet. Plus, it’s much easier on our animal world and helps bring new opportunities and visions for more eco-friendly farms turning toward production of fruits, vegetables and grains for human consumption rather than the costly feeling of animals for their bodies.

If you have questions, comments, or suggestions, remember I always enjoy hearing them.

Retired minister who still writes, speaks some, hikes less, and golfs.
View all posts by David Persons →
This entry was posted in Health and tagged Plant-Based, Vegan. Bookmark the permalink.