Mary, Having It All With Nothing! 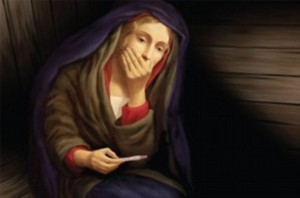 Mary, Having It All With Nothing!

“My soul magnifies the Lord, and my spirit rejoices in God my Savor, for he has looked with favor on the lowliness of his servant….” Luke 1:46

Imagine Mary, the mother of Jesus, singing out this praise, the “magnificent,” how great God has been to her! An unmarried young woman, with no civil status except slave to men and society, yet learning of her pregnancy, overflows with joy and jubilation.

“God has looked down with favor on the lowliness of his servant. All shall call me blessed; for the Mighty One has done great things for me!” How on earth could she feel such elation?

First, I would suppose for many young women, knowledge of a pregnancy would be overwhelming, joyful, and exciting. Yet in this story, Mary can be the story of all. In the midst of cold darkness and snow which “shuts-in” many of us, we too can feel and express deep delight and unspeakable joy. For Mary is the song of celebrating a Divine Presence within, the assurance life is more than darkness, slavery, disease, body pain and death. And so, it is the story of ourselves; the renewal of Divinity awareness, of our status as Sons and Daughters of God.

We all are potential Mary’s in our age, the Malala Yousafzai’s, who unknown and insignificant amid earth’s billions, whose value too many seemed worthless, suddenly are able to rise above it. We too can rise above our sense of lost-ness, insignificance, and loneliness into a euphoria beyond all description.

Mary’s song is a story of the ages, one of several surrounding the darkening, cold, dreary weeks approaching winter solstice. In the ancient Eastern Mediterranean world, her story was familiar to many. Known for thousands of years, her story goes way back to ancient Egypt some 10,000 years before: through Italy, Greece, Persia, Syria and Asia Minor. Mary’s story is similar to all the stories from who those discover the Christ within. Mary became our version as Christians; a virgin giving birth at winter’s solstice to a Savior, his baptism, his 12 disciples, his healing the sick, and finally his rising from the dead at spring equinox!

Augustine wrote in the early 5th century, near the end of his life, “The very thing which is now called the Christian religion existed among the ancients also, nor was it wanting from the inception of the human race until the coming of Christ in flesh, at which point the true region which was already in existence began to be called Christian.” (Retractions, ca 420)

None of these stories were taken literally, but seen as part of ancient mythologies explaining the unexplainable. They were stories connecting hearts and souls with the Mystery of Creation, the Universal Presence which resides within all. It’s the experience of prayer at its deepest level, entering into what in the East is called, “The Cave of the Heart.”

So as darkness deepens in these next few days, take time to stop and embrace it; go into your “caves” of prayer and meditation. Enter into your lowly stables of humility. Confess your need of forgiveness, hope, healing and joy. In such longing for light, you will likely find and experience it within, if sought diligently, overflowing with unspeakable joy, erasing fear of all thrones, kings, rulers, divisions, injustices, and brutalities. For in this very “bleak of winter, ground frozen hard–Lo! the rose e’re…” blooms anew in hearts with peace and love for all.

A few nights ago, we attended the Celtic Thunder concert in magnificent old Kleinhans Music Hall accompanied by the Buffalo Philharmonic Orchestra. For nearly two hours I listened with emotions of rapture being transported beyond myself. As I heard old familiar carols and songs, known since my youth, I felt the “magnificence” of Mary bursting forth from my inner being. Over and over I identified with the ancient story; the waiting, embracing the cold, the darkness, those newly piled mountains of snow, slippery roads, and bone-chilling temperatures. And thought, “Ah, it is nothing! This earthly life is nothing, but in my Christ Self, in my True Self, I am everything, everywhere and forever!” Oh yes, we can have it all.

“Though Christ a thousand times in Bethlehem be born, But not within myself, thy soul will be forlorn.”    -Angelius Silesius, 1624-1677

1 Response to Mary, Having It All With Nothing!